Formally gathered on August 9, 1792, Danville Congregational Church has undergone remarkable changes over its two centuries. The original 20 founding members once worshipped in a log structured, dirt-floored building until 1801, when it was consumed by fire.

After this tragic loss, a new church structure was attempted but not completed. Instead, members met at the town Court House just down the hill from the old meeting house. This served to protect parishioners during the cold, winter months, while a newly built amphitheater was created for worship during the summer months. This was their mode of worship from 1801 to 1817.

Meanwhile, to keep up with the times and 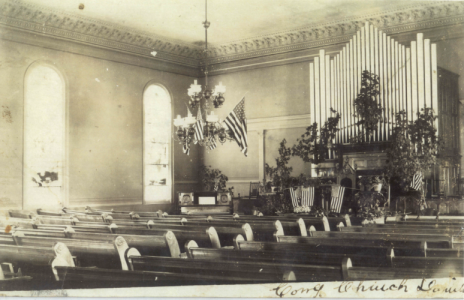 Second Great Awakening revival, church members recognized a true need for a more commodious and appropriate meeting house. In 1817 a new temple was completed near the site of the unfinished 1801 building. Reverend Jeremiah Flint served as the very first pastor of the new church, only to be later dismissed, much to the dismay of some church members. These disgruntled members left the fellowship and the remaining parishioners were without pastoral leadership from 1818 to 1823. There was much conflict and turmoil that followed.

It was in 1827 when the church began to recover with the installation of Reverend E. J. Boardman as pastor. Over the next three years 120 new members joined and the church’s mission began to stretch beyond its local responsibilities and move toward justice and equality on a national level. Shortly thereafter the congregation embraced the temperance movement and later passed a resolution condemning slavery. By 1841, the church had allocated 58% of its budget to missionary outreach.

Unfortunately, tragedy struck the Danville community again on August 3, 1895, when a fire destroyed the Congregational Church and other buildings on the property. Fortunately, the church was insured, making it more feasible to construct the current existing structure, which was designed in the Greek Revival form with Queen Anne inspired details, by architect Marshall Morrill. The dedication of this church, with two beautiful stained glass windows, was celebrated on September 2, 1897. The sanctuary was soon outfitted with a state-of-the-art Tracker organ built by H. Hall & Company of New Haven, Connecticut. This magnificent organ was graciously bequeathed to the church and is a vital part of worship and community service to this today

Soon additional stained glass windows began to beautify the sanctuary, first in 1954, then in 1984, 1988 and 1998, making a total of eight donated windows. It was also in 1954 when church members voted to become yoked with North Danville Baptist Church, only to have that yoke dissolved 40 years later.

By the mid 1950s, the congregants embarked on an ambitious renovation, modernization and redecoration mission of our church building. A memorial room was added, as well as a pastor’s study, two restrooms, oil heat and redecoration of the narthex and sanctuary.

The 1960s introduced the newly developed Cherub Choir in 1963 and marked our official joining of the United Church of Christ in 1968. The generous donation of a Paramount Carillon designed by the J.T. Verdin Company was given in 1980. Its musical offerings continue to grace the Village of Danville each day. 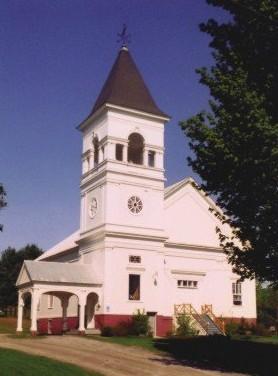 More recent events in the church’s history include the January 2002 adoption of a resolution declaring the Danville Congregational United Church of Christ to be an Open and Affirming congregation. The following year in January 2003, the congregation adopted a resolution establishing a Behavioral Covenant, governing members’ behavior based on scriptural guidelines.

Honoring the decision of the church to be an Open and Affirming congregation, the Council approved a change to the bylaws in 2008 removing the requirement that those wishing to become members of our church be approved by vote of the church council.

The Danville Congregational Church has continued its commitment to outreach by offering Sunday afternoon worship services once a month at the St. Johnsbury Health and Rehabilitation Center, support for the local chapter of Habitat for Humanity, “Operation Christmas Child”, support for the “Open Door” (our local food shelf), and hosting monthly community dinners in our church fellowship hall. In 2007, our church leaders, with the guidance of the Vermont Conference of the UCC, ventured into a Redevelopment Ministry with interim pastor Douglas Carter, making our church the second church in Vermont to enter into such a ministry. This was a mutual decision to continue building upon the foundation already established from our pastoral relationship with Rev. Carter, who was called as settled pastor in 2011.

Because of the determination of our forefathers, our church has been kept alive in spirit and tradition, allowing us to celebrate our church family of approximately 170 members today. The Danville Congregational Church has provided worship, solace and strength to many people in its 222 years and we pray that our congregation will continue to flourish and serve in the name of Christ.